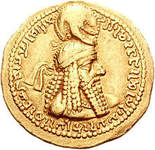 Who was Ardeshir I?
​
Ardeshir I was the founder of the Sasanian Empire. He defeated the last Parthian King, Artabanus V at the Battle of Hormozdegan on April 28, 224 AD in today’s Shushter.

Ardeshir along his son Shapur defeated Artabanus and established the Sasanian Empire, which became one of the world greatest empires for more than 400 years.

What language the Sasanians used?

Sasanians spoke a form of Persian called the Middle Persian or Pahlavi. This language was spoken in Iran from the end of Achaemenian dynasty to the Arab invasion of 7th century AD.

Pahlavi is an Indo-European language but its alphabet is based on the Aramaic which is a Semitic language like Hebrew and Arabic.
The Avesta and other important Zoroastrian texts such as the Denkard were first written down in Pahlavi in the Sasanian times. 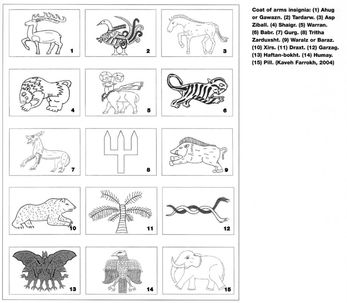 Each Sasanian military unit and noble family had its own coat of arms or Drafsh with specific colors and designs. The most prestigious Drafsh was the Drafsh e Kaviani which legend says it belonged to Kaveh the blacksmith who liberated the Iranians from the Serpent King Zahhak.

Costs of Arms and Drafshs had designs of various animals or mythical beings such as Simourgh, dragons, eagles or boars. 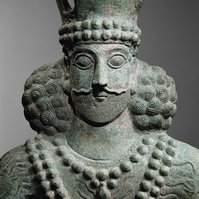 Shapur II
Shapur II was the tenth Sasanian King. He is the longest ruling monarch in Iranian history. He lived from 309 to 379 AD.

Shapur was a devout Zoroastrian. It was during his time that the Avesta was collected.
Shapur II was a great warrior. When the Arab nomads attacked Pars, the 16-year-old king retaliated by attacking them killing thousands and destroying their cities. His military campaign took him as far as Syria and Medina. When Arabs saw his fierceness, they gave him the title of Dhulu Aktaf, “the person who pierces the shoulders.”
​
Shapur II was also very successful against the Romans. He took control of Georgia and Armenia from them and killed Emperor Julian. At his death in 379 AD, the Sasanian Empire had reached its largest extend and it had become more powerful than ever before.
​ 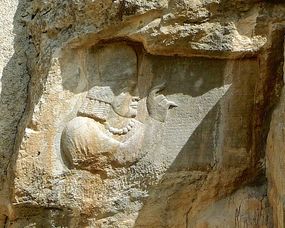 Zoroastrianism became an official religion during the Sasanian Empire. The Avesta was collected and written down and the mobeds (the Zoroastrian priests) became wealthy and powerful. One of the most famous of them was Kartir who lived in third century. Kartir served five different Sasanian King.

​Kartir supported the Orthodox version of Zoroastrianism and according to his own words he forced many people to become Zoroastrian or be killed. As a result, Kartir ordered the execution of many Christians, Buddhist, Manicheans and other sects of Zoroastrianism that disagreed with him.

Kartir’s proclamations have been left today in the form of his inscription in Naqsh e Rajab near the city of Istakhar. In that Kartir talks about himself and his accomplishments. Kartir is the only commoner allowed to have an inscription of his own. 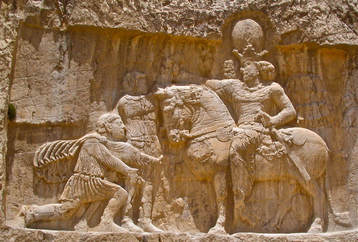 Valerian was a Roman Emperor who was captured by the Sasanian King Shapur I at the Battle of Edessa in 260 AD. After his capture Valerian was sent to Bishapur to live in comfort and luxury for the rest of his life. The Roman captives and engineers from Battle of Edessa built the Band e Qaiysar (Caesar’s dam) near Susa. 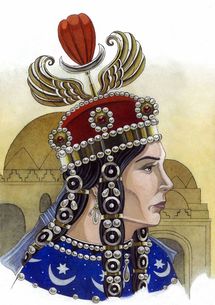 Borani is a Persian dish made from yogurt and spinach. Some believe that this dish was a favorite of Queen Boran (Pourandokht) who came to power in 628 AD and was one of the last Sasanian rulers (see her on the left).  Queen Boran was a daughter of the Sasanian King Khosrow II and ruled for 2 years.
​
She tried to bring stability to the Sasanian rule by lowering taxes, improving infrastructure and approving a peace treaty with the Romans. 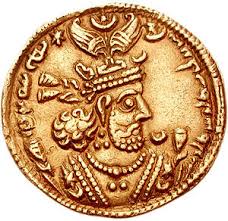 The End of the Empire

Sasanian Empire collapsed in 640 AD when the Arab army invaded Iran and defeated the Sasanian forces led by General Rostam Farokhzad at the Battle of Qadesiyeh (in today’s Iraq).

​The last Sasanian King Yazdigird III fled to the east and the Arabs captured the capital city of Ctesphon located in today’s Iraq which led to the collapse of the Empire.

After  the Arab invasion the religion of Islam was gradually imposed  on the Zoroastrian population and in the process thousands of Persians were killed and enslaved by the invading Arab army.
Many Sasanian nobles fled Iran and took refuge in China.