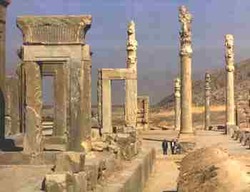 The ceremonial capital of the Persian Empire was called Persepolis by the ancient Greeks. Ancient Persians knew it as Parsa. It is located near the city of Shiraz today.

King Darius the Great ordered the construction of Persepolis in 515 BC. Persepolis included several audience halls, palaces, parks and museums. Thousands of workers from different parts of ancient Persia worked on Persepolis which was adorned with gold and silver, colorful tiles, colorful tapestries and expensive rugs. Persepolis was destroyed by the Greek commander, Alexander III, in 330 BC. 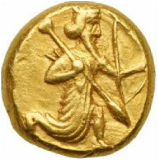 What is a daric?

A daric is a gold coin issued by King Darius the Great (521-486 BC). Daric made the trade much easier and standardized the coinage in Persia. People also used silver shekels to buy things. 1 daric was equal to 20 shekels. 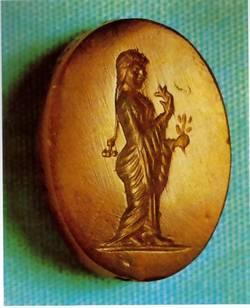 Women had many rights in ancient Persia. They could own property and manage their own workshops and estates and even take part in trade. We know that a Persian noblewoman named Irdabama owned and managed a winery near Persepolis in 500 BC. Some women even owned and managed their textile workshops where hundreds of men worked.

Government encouraged women to have many children. For each son born, a woman was awarded 2 jars of flour and 10 quarts of wine. Those who bore a girl were awarded half the prize.

The Royal Road was a major road connecting Susa in Persia to Sardis in Lydia (today's Turkey). The road was more than 1600 miles long with 111 posts stationed along it.  These stations were equipped with fresh horse and food for king's messenger. A king's messenger could travel the road in seven days.The Royal Road was the first asphalt road and the safest road to travel along because the security was high on this road with no bandits around.

Many subject people worked as spies or advisers for Persian kings. One was Ujahorresne, an Egyptian doctor and priest, who worked as an adviser for both King Cambyses and King Darius the Great. His autobiography (story of his life) gives us much information about Persian kings. 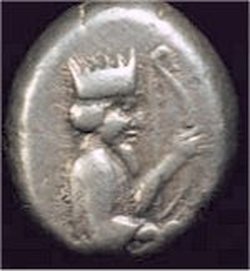 Scylax was a famous Greek explorer and a good friend of King Darius the Great (depicted in the left). In 518 BC, the King sends Scylax to explore the Indus River. Scylax explored as far as Sri Lanka and sailed to the east to the Red Sea. After sailing for 30 months, he returned to King Darius's court to report. He later wrote a book about his travels but his books have not survived. 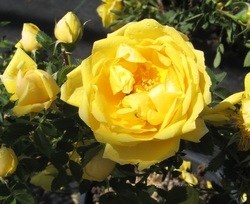 Gardening was a favorite pastime for many noblemen. Cyrus the Younger, son of King Darius II, was an avid gardener who planted many trees and flowers in his palace in Sardis.
King Xerxes (486 BC) loved a tree so much, he adorned it with jewelry and put a guard in charge of protecting it.
Rosa Foetida Persiana or Persian yellow rose pictured here was originated in Persia. in the 7th century AD, the Arabs took the Persian yellow rose to Spain where they were spread all over Europe. 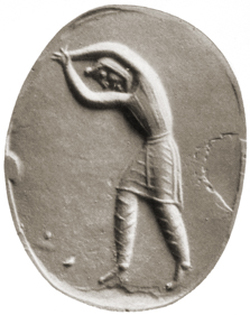 According to Herodotus, an ancient Greek historian, the Persians loved to dance. In fact they danced as often as they rode their horses. Even the king danced a shield dance once a year during Mehregan, the Zoroastrian fall festival. The ancient Persians danced at their birthdays.

Both poor and wealthy people celebrated their birthdays by exchanging gifts and sacrificing a horse, a goat or sheep. Then they sang and danced all night. 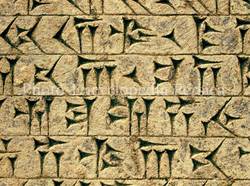 
Check out this site to learn more about Persian cuneiform and see how Ahura Mazda was written in Old Persian.

Beauty and Makeup in ancient Persia

Ancient Persians were keen admirer of beauty and fashion. Women used red ocher (a kind of pigment) to color their lips and cheeks. They also used green malachite (a copper compound) to color their eyelids. Ancient Persian men and women took care of their skin. Unlike the Egyptians, who loved to get tanned, Persians used colorful parasols to protect their skin from sunlight.

The wealthy people used various creams made of lion fat and saffron to moisturize their skins. Persians both men and women also used various different perfumes taken from roses or acacias.