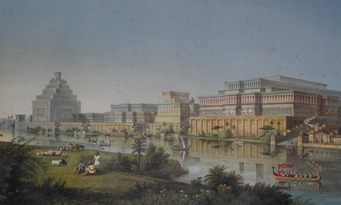 
In October 539 BC, the Persian King, Cyrus the Great, conquered the great city of Babylon. The 200,000 residents of Babylon woke up in the morning to find the Persian forces in their city. When Cyrus entered the city, there was little resistance to his army. The Babylonians rejoiced because their much-hated king, Nabonidus, had fled the city. King Cyrus ordered his army to respect the Babylonian temples and palaces and not to destroy anything. The army had strict orders not to kill any women, children, priests, or doctors.

King Cyrus entered the city with much celebration. He then immediately went to the temple of Marduk, the great Babylonian god, to pay his respects. He has also met with the Babylonian high priests and other dignitaries. The capture of Babylon was indeed the beginning of a new era. 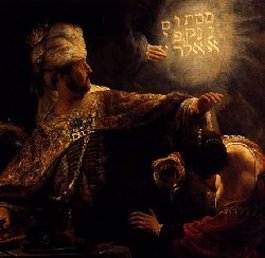 The Writing is on the Wall!

Have you ever heard of the expression “the writing is on the wall"? This means a disaster is about to happen. This expression comes from the Book of Daniel. Prophet Daniel was a Jewish nobleman who lived in exile in Babylon. One night he saw a message on a wall and predicted that powerful Babylon would fall to the Persians.

The next day, the Persian army conquered Babylon and Cyrus the Great freed all the Jewish captives and ordered the construction of the Second Temple in Jerusalem. That’s why he is known as the Messiah among the Jewish people.

What is Cyrus Cylinder?

Cyrus Cylinder is ancient clay cylinder written by Cyrus the Great. In it, he declares that all the people who lived in Iran should leave in peace and he gave everyone freedom to speak their language and practice their own religion. Cyrus Cylinder is the oldest human rights charter. Cyrus Cylinder is written in Akkadian (a Semitic languages spoken in Mesopotamia in today's Iraq), and it was discovered in ruins of Babylon. 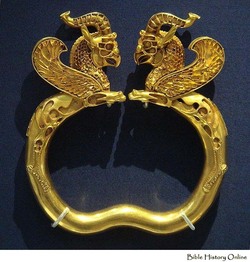 The ancient Persians loved to wear expensive jewelry as sign of power and prestige. They used gold, silver and stones like turquoise and cornelian in their jewelry. They even wore their jewelry when they went to war!
It was fashionable at that time for men to wear gold earring and protect their robes with beautiful, gold or silver buttons.

What is a cylinder seal?


Ancient people used stamp seals or cylinder seals to identify themselves the way we use a signature today. Cylinder seals were made of ivory, stone, bone or even glass. This ancient Persian cylinder seal probably belongs to a wealthy Persian lady who lived during the Achaemenid Empire. She used this cylinder seal as her signature. It shows her sitting on a chair holding a flower,  while her daughter is presenting her with a bird. Her maid is standing behind an incense burner holding a little box of incense. 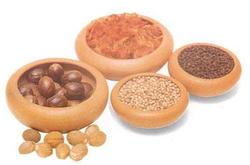 People in ancient Persia used many different spices in their foods such as salt, pepper, turmeric, saffron and cinnamon. Some of these spices were imported to Iran from India and Mesopotamia. Ancient Persians also made various vegetable and fruit preserves with salt and vinegar. One exotic fruit in ancient Persia was lemon which was imported from China.