A Gift for the king

Summarized by Rebecca Cann
Retold and Illustrated by Christopher Mason
This story was first written by the third-century Roman writer Aelian, and it has been based on the book of the same name by Christopher Mason published in 1989. You can purchase it from amazon.com. 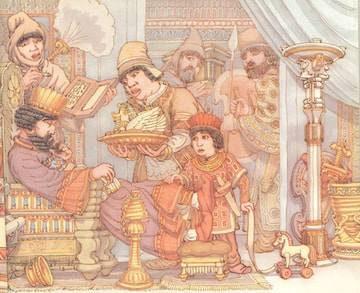 Long time ago there was a king in Persia whose name was Artaxerxes* who was very rich and ruled over a huge empire. He had hundreds of servants and lived in a large, wonderful palace full of beautiful things.

One day, King Artaxerxes decided to walk out of his palace and explore the countryside. His many servants were surprised to see the king walking and ran after him wondering where the king was going.

Outside the palace, the king met two merchants who presented him with a bottle of a rare perfume
and some incense from afar away place. But the king was not impressed. He told his servants to keep the perfumes and later put them with the rest of his perfumes in the palace.