​Cows are among the most common domesticated animals. They were first domesticated in the southwest of today’s Turkey more than 10,000 years ago for their meat, milk and skin. In India, cows are sacred animals. It is said that the Hindu god, Krishna, was raised in the family of cow herders, and his other name, Govinda, means “protector of cows.”
The other Hindu god, Shiva, is said to ride on the back of a bull named Nandi.

Cows are also sacred in some parts of Japan and among the Maasai tribes of the East Africa.
Cows are among the most sacred animals in the Avesta. The cow is used as a symbol of the living world in the Gathas.
In the second Song of the Gathas, it is the cow (the living world) who begs Ahura Mazda to send Zarathushtra (Zoroaster) as a leader to change the world.

In the Zoroastrian creation story, Ahirman, the Evil Spirit, attacks Ahura Mazda’s creations.
First he brings sickness to Gayomard, the First Man, and then he kills the Ancient Cow. The creation myth says that from the dead body of this cow 55 species of grain and 12 species of the medicinal plants came out. From his blood wine was made.
Later on the seed of the dead cow was purified by the moon and other animals were created from it.
The first animal was a pair of oxen, one male and one female, then the goat, sheep, camel, the horse and other animals were created.
So according to the Avesta, the origin of all animals is the cow. The oxen are cows trained as work animals. They are often male and adult and they are used for plowing, carrying cargo and transport. The Avesta tells us that there are 15
species of the ox in the world.
One of the first depictions of a cow is from a cave in Lascaux (laas-ko) in southwestern France (below).
The cave paintings are from 20,000 years ago and they show different animals including the red cow which is entioned in the Avesta as well. 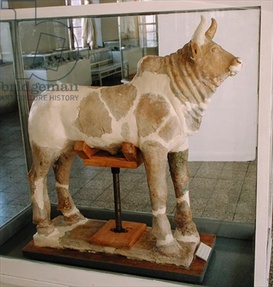 The Elamites who lived in southwest of Iran before the arrival of the Persians considered cows as the symbol of strength and productivity. The Elamite glazed clay figure of a cow on the left from 1250 BC is found in Chogha Zanbil, Iran. 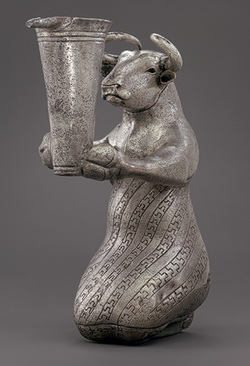 This small silver bull figurine below is from the early Elamite period around 3000 BC. It is wearing a patterned dress and holding a vessel.
It was buried probably as a part of a ceremony or it could have been part of a myth or a story.
​ 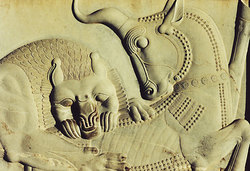 This carving from Apadana Hall (below) in Persepolis shows a lion killing the bull.
Some believe this shows the killing of the ancient cow by Ahriman. 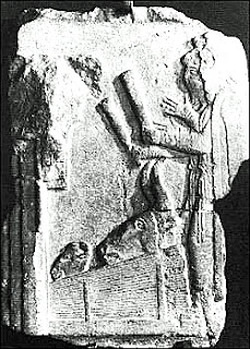 This stone carving from 4th century BC shows two Magi (ancient Zoroastrian priests) with the sacred barsom (bundle of twigs symbolizing plant creation) in their hands. The priests have sacrificed two cows. Although Zarathushtra was against sacrificing animals, many Zoroastrian priests continued the practice after his death.