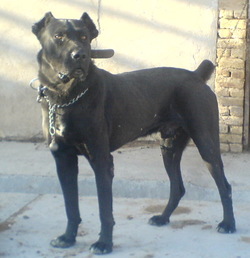 Dogs were sacred animals in the Avesta because of their obedience and usefulness to people. Dogs can protect the flock and safeguard houses against theft. Because of their helpful character, the ancient Zoroastrians respected dogs and had many rules for taking care of them. For example, if someone gave a bad food to a dog, he was punished. If someone ate a piece of bread, he had to give a handful to a dog. The ancient Iranians believed that if someone harmed a dog, his soul would never go to heaven.

The Avesta mentions 10 species of dog including the shepherd dog, village dog, and the fox. Today we have more than 37 species of dog and 400 different breeds. One breed is Persian Sheppard dog or Persian Mastiff (left). These dogs have been used in Iran for centuries to protect the sheep against wolves and jackals or even as entertainment in dogfights. Persian Mastiffs are strong, protective and very loyal dogs. 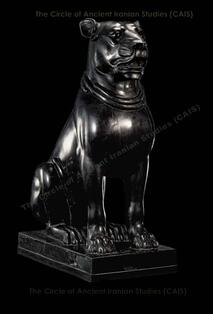 This statue from Persepolis shows a Persian Mastiff. The ancient Persians took their dogs to battle. King Xerxes (489 BCE), for example, took a large number of them in his war with the Greeks.

The word sag  (dog in Persian) comes from the word seh yek meaning one-third because the ancient Persians believed that one third of a dog is human.
One of the earliest representations of a dog in Iran is on this drinking cup from 4000 BC. It shows Persian Greyhounds or Salukis lying by a pool. Persian Greyhounds were used for hunting in ancient Iran. 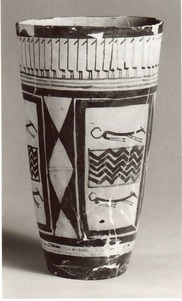 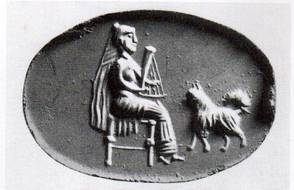