Dugdav and the Mysterious Light

This myth is partially taken from the Denkard, an ancient Zoroastrian text.


Long, long ago, a young girl named Dugdav lived in a small village somewhere in Central Asia. One day Dugdav was out tending the family cattle when she suddenly heard a voice. She looked up into the blue sky and saw a large patch of white cloud right above her. Then a hole in the cloud opened up, a ray of light shone on her, and a voice said, "Dugdav, have been chosen to bear a very special son. Your son will grow up to guide the people to Righteousness and Truth. Eat this sacred plant for it will give you much strength."

Dugdav looked around, but she didn't see anyone. In front of her, however, lay a bowl of milk, and over the bowl there was a green twig with fragrant leaves. Dugdav reluctantly ate the strange plant and drank the milk.

When she went to wash the bowl in the nearby pond, she noticed her face-it glowed like the morning sun! Amazed and scared, she ran toward home.

On the way, farmers in a barley field saw her. They said, "Look at Dugdav! Her face is so bright! What happened to her?" 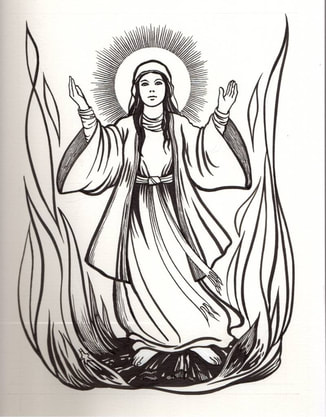 As she passed by a waterfall, village women, who were filling their jars with water, noticed her. "Look at Dugdav!," they said. "There is a halo around her!"

The next day all the villagers saw Dugdav's glowing face and got really frightened. They thought Dugdav was bewitched. So they went to Dugdav's father and said, "Frahim-Rava, have you noticed the golden light around your daughter's face? She's turned into an evil witch. We have to kill her, or she'll destroy our village." Dugdav's father was a wise sage. He knew his daughter had to be very special to have a golden light surrounding her. So he refused to hand her over.

But the villagers didn't give up. They complained to the Karapans, the high priests of the village. The Karapans were ignorant and mean, but they had much influence. They decided to put Dugdav through a Fire Ordeal to see if she was guilty.

The next day at the sunset, they lit a large bonfire. All the villagers gathered to see the Fire Ordeal. Frahim-Rava stood calmly among the crowd for he was confident of his daughter's innocence. Dugdav's mother, however, cried with worry. The evil Karapans pushed Dugdav through the fire.

Dugdav was frightened but did not show her fear. She bravely stepped into the blazing fire. They crowd cheered. They thought they had destroyed their witch, but Dugdav emerged from the fire unharmed-her bare feet, white dress, and long hair were untouched.The crowd gasped with surprise. The mean Karapans frowned. They weren't pleased at all. But they remained silent.​


​A few months later, a mysterious disease swept the village killing all the camels and the cows. The villagers didn't know what to do. They prayed to their gods, but the livestock kept dying. The priests told the people that someone in the village was using black magic to kill their animals. "Who could do this?" the villagers wondered. People felt anxious and were ready to blame someone.
The next evening as Dugdav and her family were quietly having their supper, they heard a lot of noise outside their home. Dugdav looked out of the window and saw a large crowd gathering around the house. The angry villagers stood outside with torches in their hands-the Karapans among them. Someone in the crowd shouted, "Dugdav, you are an evil witch. You are using black magic to kill our cows. Come out, or we'll burn your home."

Another man cried, "Frahim-Rava, give up your daughter now. She has the mark of the demons. If she stays alive, we'll lose all our valuable cattle." The crowd went wild. "Dugdav is a witch! Dugdav is a witch!"

Scared, Dugdav and her family remained inside. They didn't know what to do. Shaken, they gathered around the family fire altar, placed some incense in the fire, and prayed to be saved.