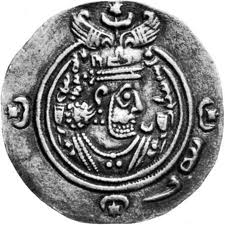 Birds of prey are those kinds of birds that hunt their food with the help of their flight and their strong vision.
Owls, eagles, falcons and vultures are all birds of prey. The ancient Zoroastrians considered all birds of prey sacred because they hunt rodents and snakes.

The Bundahishn, a ninth century Zoroastrian text, tells us that there are 110 species of the birds and it names many different birds- some like Griffin are mythical but some like black eagle are real. Birds of prey clean the environment by eating the dead animals that’s why the ancient Zoroastrians considered them sacred.

According to the Bundahishn, Ahura Mazda created the falcon. God told falcon, “I have great love and respect for you for you are fighting the Evil Spirit, Ahriman, and although you eat other birds, you are still valuable because if I had not created you, Ahriman would have made a winged wolf to destroy the creation.”

The ancient Zoroastrians believed falcons and eagles were the chief of all birds.
In fact, the mythical hero, Yima (Jamshid) took a pair of falcons to his enclosure to save them from an upcoming harsh winter.
The falcon is also associated with King’s Glory and it is also representative of pre-Zoroastrian god of Victory, Verethragna (Bahram), who appears as falcon sometimes. The Sasanian kings, Bahram II and Khosrow II Parviz, used falcon wings on their crowns.

This silver coin from 6th century AD shows the Sasanian King Khosrow II with the falcon wings on his crown. The falcon represents victory.

The Saker Falcon is a large falcon that lives across Asia from China to Iran. The Saker falcon      hunts horizontally and eats mainly rodents and birds. The Saker falcon does not build a nest of its own but uses old nests over the cliffs. The Saker is the national bird of Hungry. Falcons are endangered species in Iran and elsewhere and they need preservation.


Eagle is a large, powerful bird of prey. Most of the sixty species of the eagle live in Eurasia and Africa. Eagles build their nest in high trees and mountains. They usually lay two eggs but the chick with more power eats the other chick. The female chick is usually more powerful.
From the ancient times, eagles were considered the symbol of power and strength. This gold beaker below, found in Marlik in northern Iran, is from 4000 BC. It shows monsters with eagle head and winged bulls.The ancient Iranians praised black eagle for its power and elegance. The Achaemenids who ruled Iran from 550 BC to 330 BC chose eagle as the symbol of their army (see below). 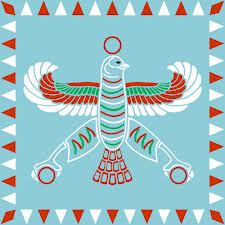 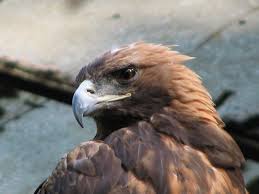 The Golden Eagle (Aquila Chrysaetos) is one of the best known birds of prey in Iran. It lives in high mountains of Alborz and Zagros and in Khorasan and Kerman. The Golden eagle’s wingspan is average 2 m (7 ft). The European Golden Eagle (below) which is smaller than the Golden Eagle lives throughout Europe and the northernparts of Iran near the Caspian coast. The Golden Eagle has brown feathers and it is silent. 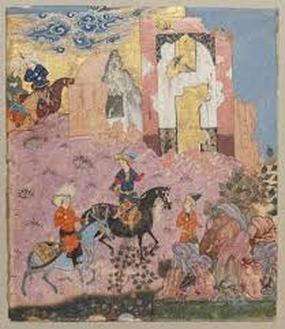 Like all other birds of prey, owls were considered a sacred animal in ancient Iran. Just like ancient Greeks, the Persians saw the owl as the symbol of wisdom and knowledge.

This Persian Medieval miniature shows the story of Sasanian King Khosrow I Anushiravan who was riding with his vizier when he hears two owls talking.

Owls were complaining about king’s administration and how his policies have left many cities ruined and bankrupt. Upon hearing this, the King starts to implement various administrative reforms which improve the condition of the poor and the needy.

The Little Owl shown here is a small owl which lives in warmer areas of Asia like in rocky semi-desert areas of Iran or in eastern steppes of Iran around Birjand Province.

The Little Owl eats frogs, insects, worms or small mammal like mice and that’s the reason the ancient Iranians appreciated the owl. The ancient Greeks liked this owl as well. The Little owl was sacred to the Greek goddess Athena.
The little owl adapts well to people and they stay in full view of people without fear. 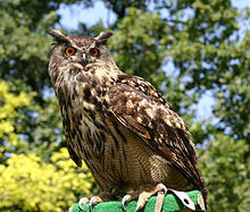 It usually lives in deserts and rocky areas mainly in North East of Iran.
The Eagle Owl eats small mammals but at times it attacks large mammals such as foxes, jackal and even small deer. The wingspan of the eagle owl can reach 200 cm (79 in.). The Eagle Owl lives up to 20 years in the wild.


All birds of prey are God’s creation and we have the responsibility to prevent
their extinction.
If you are interested in helping the birds of prey, go to these websites to help: