​Retold and Summarized by Ashton Zadeh
Adapted from Shahnameh of Ferdowsi

Long ago, in ancient Iran, there lived a great warrior named Sām. He and his beautiful wife had no children, so Sām prayed for a son. Eventually, his wife became pregnant and gave birth to a baby boy. The baby was healthy, but had skin and hair as white as snow!

When Sam saw his son, he became terribly angry. He thought God had given this strange, white haired boy as a punishment. He decided to get rid of his baby. He took the boy, who was called Zāl, to the Alborz Mountains and left him there to die.

At the top of the mountain lived a beautiful and wise bird called Simorgh. The giant bird noticed the abandoned baby, picked him up, and took him to her nest to feed him to her chicks. But God had other plans because when Simorgh and her chicks looked at Zāl's face, they took pity on him and adopted the white haired baby. ​ 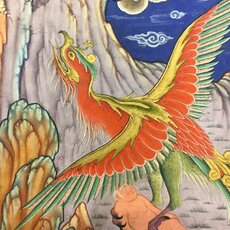 Many years passed, and Zāl grew to be a very handsome youth. Many travelers at the Alborz Mountains saw glimpses of this handsome boy with long white hair and skin as white as snow. Eventually, rumors of Zāl spread to Sām's home, but the old warrior ignored them. Then one night, he had a strange dream. In it, he saw a man from a distant land riding on a horse towards him. The strange man declared, "Your beautiful son has been born!”​ 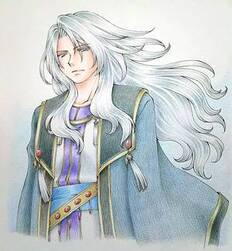 Sām woke up terrified and asked a wise priest what the dream meant. The priest replied, "Every animal, from the lions on land to the fish in the sea, love their children regardless of how they look. But you abandoned your innocent son just because he has white hair and skin! Look at your own white hair! Is that a sin too?”

Sām then realized how foolish he was and traveled to the Alborz Mountains. After searching around, he found Simorgh's nest. He begged the bird to return his son to him. The wise bird looked at Zāl, who was now an intelligent teenager. Even though it broke her heart, she asked Zāl to return to his father who truly regretted his actions.

Zāl did not want to leave her nest, but Simorgh assured him that he would be happier with his father. Before he left, she gave Zāl three of her feathers. "If you ever need my help, or your father betrays you, throw one of my feathers into a sacred fire and I will rush to your side,” Simorgh promised. With the special feathers in his hands, Zāl returned home with his father. ​ 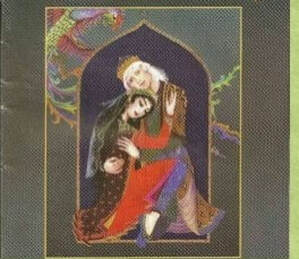 Zāl grew up to become a skilled and handsome warrior. He had the shoulders and trunk of a lion, a handsome face, a generous heart, and was the greatest warrior Iran had ever seen. Rumors of such a warrior reached the ears of the beautiful princess Rudabeh, who lived in the kingdom of Kabul.

​When she heard a description of Zāl, she fell in love with him and swore she would marry him. She paid her servant girl hundreds of gold coins and jewels to deliver her letters to Zāl. When Zāl received the letters, he became curious and decided to meet Rudabeh.

When Zāl reached Rudabeh's palace, he found out that she lived at the top of a tower. But Rudabeh had a plan of her own. She let down her long black hair so Zāl could climb up to her room and visit her. After they met in-person, Zāl fell in love with the beautiful princess and they decided to get married.

However, Rudabeh’s father, King Mehrab of Kabul, was an idol worshipper and the grandson of the evil Zahhāk. When the king of Iran, Manuchehr, heard of Zāl’s intent to marry Rudabeh, he refused to grant permission. King Manuchehr and Mehrab were mortal enemies and this gave them an excuse to go to war.

However, right before war was declared, the priests of Kabul and Iran read the stars and foresaw a blessed match between Zāl and Rudabeh.

"From the marriage of Zāl and Rudabeh a mighty son will be born. Greater than any warrior before him. He will be Iran's most famous defender and will be unbeatable," they declared.

After hearing this, both kings agreed to allow the young couple to marry and gave their blessings. Zāl and Rudabeh got married in a beautiful ceremony in Kabul. 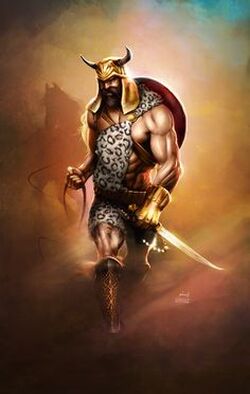 After nine months, the pregnant Rudabeh went to a difficult labor and she was about to die.
Zāl remembered  Simurgh’s feather he had received many years ago. He set up a sacred fire and threw the feather into the flames. As the feather burned, the sky turned dark with storm clouds and Simorgh majestically appeared in front of Zāl.

Simorgh instructed the warrior to make a medication from ingredients she had provided. Doctors gave the magical medicine to Rudabeh who then easily gave birth to a healthy son named Rostam, who went on to become one of the most celebrated Iranian warriors of all time.   ​​