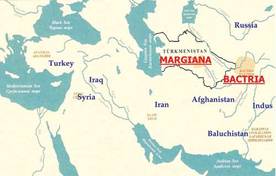 We don't know exactly when and where Zoroaster (Zarathushtra) lived. Most historians, however, believe that he lived in ancient Margiana or Bactria in today's Turkmenistan and Uzbekistan around 1800 to 1200 BC.

Zoroaster lived during the Bronze Age. In this period people learned to mix tin with copper to make bronze, which could be cast in different shapes like this bronze seal from 1600 BC. In Central Asia, Bronze Age started around 2200 BC and continued until 1200 BC.

What did Bronze Age people of Central Asia do?

In Central Asia, most Bronze Age people were herdsmen. They took their cows, sheep, two-humped camels, and horses from one place to another for grazing. They moved to different places with the help of wheeled carts driven by oxen. These carts were first invented in Central Asia around 3000 BC.
Some of these nomads were fierce warriors. They rode chariots driven by powerful horses and carried weapons like this bronze sword on the left. They attacked farmers destroying their crops and stealing their properties. Zarathushtra in his Divine Songs, the Gathas, condemns the cruelty of these warriors. He asks God for a peaceful productive way of life. 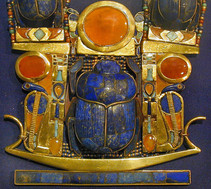 Some Bronze Age people worked as traders. Central Asia was rich in silver, gold and precious stones like carnelian. Traders took these valuable goods to far away places like India, Iran and Mesopotamia. One important gemstone was lapis lazuli, which came from northern Afghanistan. As early as 2500 BC, traders in Central Asia took lapis to Egypt and Mesopotamia. This blue Egyptian scarab is made of lapis from Central Asia. The word lapis lazuli has come from Persian word "azur" means blue.

In Margiana (northern Afghanistan) and Bactria where Zoroaster probably lived archaeologists have found many beautiful objects like jewelry, ivory statues, ceramic vessels, bronze pins and weapons. This alabaster head on the left from 1500 BC, for example, was found in Margiana.

At the time of Zoroaster (Zarathushtra) some people decided to settle down and farm their fields. These farmers stayed in one place and grew wheat or barley. They knew how to build dams and irrigation canals to bring water to their fields. In his Divine Songs, the Gathas, Zarathushtra praises the peaceful life of these farmers.
What did Bronze Age people eat?

Archaeologists have recently found a mummy of a Central Asian woman from 2000 BC. The woman was buried with her winnowing tray used to clean wheat of its husks. To winnow, one has to toss wheat into the air. The wind will blow the wheat husks and the heavy, edible grain remains.

The winnowing tray had to be very important for the woman to be buried with her. This shows that wheat was an important part of the diet for Bronze Age people in Central Asia. They probably made bread and soup from wheat. Barley was another source of food for them. However, Zarathushtra and his people were not familiar with rice or potatoes.
One important food was butter and cheese. Since all Bronze Age people in Europe, Mesopotamia, and Asia Minor knew
about cheese, it is possible that Zarathushtra and his people knew about cheese and butter too.

People also ate their cattle. Woolly sheep was first domesticated in the steppes of Central Asia around 3500 BC.

Since then, people have been using sheep's meat, milk, and wool. Besides domestic animals, Central Asians could hunt wild animals like hare, onager (Asiatic wild donkey), or wild boar for food.

What did Bronze Age people wear?

Archaeologists have recently found several mummies who may have belonged to an Iranian tribe. These people lived in the steppes of Central Asia. The clothes of these mummies can help us understand what Zarathushtra (Zoroaster) and his people wore.

This mummy on the left belongs to a 55-year-old man from 1000 BC. He is known as "Cherchen Man." He wears white deerskin boots, colored woolen pants and woolen shirt.

Bronze Age people of Central Asia loved to wear plaid woolen clothes like the piece of twill on the right which is dated around 1200 BC. Plaid woolen twill like this one resembles the same twill worn by early Celts who lived in Europe. The ancient Persians also loved to wear colorful clothes with many ornaments and designs. Scholars believe that Celts and Iranian people who lived in Central Asia were related.

The mummy below left belongs to a woman who lived around 1800 BC in Central Asia. She wears a woolen wrap and a felt hood. 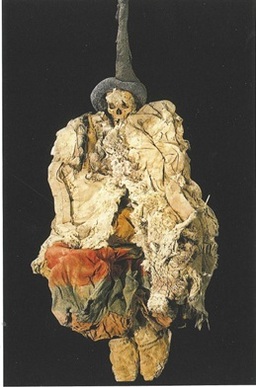 Ancient Iranian people in Central Asia wore felt hats. Some like this skeleton of a woman from 800 BC wore long pointed hat similar to the European witches or wizards. In fact, some scholars believe that the magi (the Zoroastrian priests) wore similar conical hats.

The Europeans believed that the magi were astrologers who could use magic (the words magic and might in English have come from the Persian word magi). That’s why the Medieval Europeans portrayed their wizards and witches with long pointed hat similar to the one this Iranian woman is wearing. 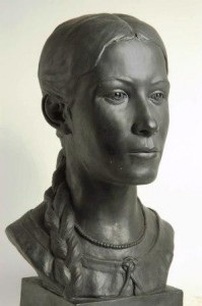 A reconstruction of a bronze age woman from Central Asia at the time of Zarathushtra.

What was the religion of Bronze Age people?

At the time of Zarathushtra, people worshiped different gods and goddesses like Mithra, Anahita, Apam Napat, Varuna and many more. Ancient Iranians called these gods Daevas-the shining ones.

Asho Zarathushtra rejected all the Daevas calling them the "false gods." He also rejected all the priests who were very powerful and influential. These priests used magic, sacrificed animals, and performed many elaborate rituals. They even drank a kind of drink taken from a toxic plant known as Haoma.

Zarathushtra didn't like these priests and the rituals they performed. He called the priests Karapans which means "mumbling priests." Zarathushtra (Zoroaster) invited people to move away from Karapans' rituals and worship one God- Ahura Mazda.

Not all the Bronze Age people lived in villages. In fact, many lived in large cities. Archeologists have found a large city in ancient Margiana (in today's Gonur Tepe, Turkmenistan) that was built around 2000 BC. Some believe that this city may have existed back in Copper Age around 4500 BC.


The people of this city had a sophisticated civilization. They made beautiful alabaster vessels similar to this Bactrian (from Bactria in Central Asia) vase from 1800 BC as well as elaborate pottery. They might even have invented a kind of writing too.

In this city, archaeologists have found a strong fort with walls thirty feet high. They also found a peculiar building with a roofless courtyard surrounded by rooms. Scientists found large amount of the intoxicating plant, Haoma, in these rooms.

Haoma played an important role in the religion of Central Asian people before Zoroaster. That's why many archaeologists think that this peculiar building had to be built as a kind of temple. In the Holy Gathas, Haoma has been condemned by Asho Zarathushtra because it has a bad affect on your mind. 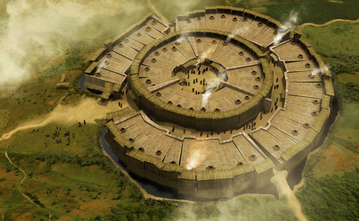 Cities of Jarkutan and Sintashta

The city of Jarkutan was built around 1500 BC near the Oxus River in today’s Uzbekistan, south of Samarkand.

This city of 20,000 inhabitants had residential areas, workshops, a fire temple and a palace. The city was enclosed within a citadel with 13 square towers.

Archeologist have found the trace of the oldest fire temples in Jarkutan. This shows that the people of this town may have been among the early Zoroastrians.

Jarkutan’s fire temple had 7 fire altars and 3 cultic fountains. In this temple both fire and water were worshiped.
The temple also produced and sold small votive gifts to people to be buried with their dead.
The temple also owned a large herd of sheep for sacrifice (Zarathushtra was against sacrifice and would not have approved of this custom).

The early residents of Jarkutan buried their dead inside their houses so their dead became their guardian ancestors. Later, they started burying their dead outside of the city and they made sacrifices to their dead. Jarkutan holds the earliest evidence of exposure of the dead. Apparently some people in this town exposed their dead and then put their bones in specially made ossuaries (vaults).

Just like the Iranian speaking Sarmatians who once lived in Central Asia, Jarkutan people buried their dead
with their dogs so that the dogs could become their guards in the afterlife.
Dogs later played an important role in the Zoroastrian burial rituals.

Another town was Sintashta in the eastern side of the Ural Mountains, north of the Aral Sea in today’s Tajikistan.
This round town of 1200 people was first built in 2200 BC and lasted until 1700 BC.
Some scholars believe that Sintashta's architecture was similar to a circular place built by Yima,
an important hero in the Avesta known today as Jamshid, who saved the Aryan people from cold and extinction.
In the Gathas, Zarathushtra condemns Yima (Jamshid) because of his arrogance.

The people of Sintashta lived in a fortified town inside mud brick houses with wooden roofs.
Each house had its own hearth (fireplace) and a well with a covered drain which took the waste water to the sewage pipe that ran under the street. This kind of the technology was only found in Europe in the 19th century!!

The people of Sintashta were skilled artisans who made copper and bronze objects and exported them. Some raised herds and others farmed millet and barley.