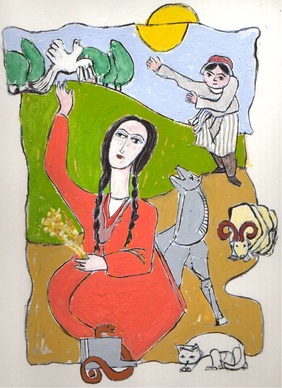 The ancient Iranians believed that Yima was their first king. Many different stories exist about Yima.
This one is partially based on the Vendidad, an ancient Zoroastrian text.

Long time ago, people in the world did not care about each other. They fought wars, cheated and lied. Among them lived a kind and honest shepherd named Yima.

One day, when Yima was herding his cattle, God called him and said, "Yima, son of Vivanghat, beware! Soon, I will send a heavy snowstorm that will kill all the liars and the evil people in the world. Crush the Earth, Yima, and build a large, square cave. Find an honest man and woman. Place the couple and every pair of animal in the cave. Do not get out until the storm is gone."

Near a hill, Yima dug the ground with his own hands. He made a tunnel under the hill and built a square cave. He then fashioned a window as well as a wooden door. Afterwards, Yima went to find an honest couple.

Yima searched all the towns and villages in the world. He looked for a kind and generous person everywhere in the woods, valleys, and open plains. However, he was not able to find one. Until in a far away place, he came across a young couple who lived in a small farm. When the couple met Yima, they said, "Stranger, you must have traveled a long way. You look tired and hungry.

Please give us honor and spend the night in our hut." The man and woman were poor. Yet, they shared with Yima their meager dinner of barley bread, goat cheese, and sour milk, giving him the bigger portions. When the time came for sleep, the man and woman offered Yima their only bed and their woolen blanket. The couple themselves slept on the floor with a thin covering.

Yima knew he had found a kind couple. The next morning, Yima said to the couple, "Soon, God will send a heavy snowstorm to destroy all the evil people in the world. Take refuge in a cave I have built. I will join you there after gathering all the animals and plants."

Hearing the news, the couple thanked Yima and said, "Yima, you are a kind shepherd. We are thankful that you saved our lives. We will help you find the animals."

Thereafter, Yima and the couple went around looking for the animals. Yima went to the forest and warned the animals. So monkeys, boars, tigers, foxes, and all the other forest animals followed him in pairs to the cave.

The man climbed the mountain and gathered goats, mountain lions, and llamas. While the woman rushed to the desert to warn camels and all other desert animals.

Yima and the couple then gathered all the plant seeds, placed them in large sacks, and carried them to the cave. Yima lit a large bon fire and locked the wooden door.

The following day, dark clouds appeared in the sky and covered the sun. A cold wind blew from the north, and frost sat on the grass and trees. Soon, snow began to fall. It snowed and snowed until everywhere, forests, plains, deserts, and mountains were covered with snow and lakes and rivers froze up.

The snow reached so high, it covered the window on Yima’s cave. But Yima, the couple, and the animals were comfortable as they were warm and had enough food and water.

Forty months passed when one early morning, Yima noticed that no snow left on the window. He opened the window and peeked through. "The storm is gone! " cried Yima, "the sun is shining again, and the sky is blue!"

The couple and Yima ran out of the cave to look around. The snow had melted. Only a white cap remained at the top of the mountains. The ice on the sea had vanished too. The rivers and streams ran once again. However, no plants, animals, and people left in the world. Everywhere was empty and bleak. Yima and the couple were happy to have survived. They danced around and thanked God for saving them. Then, they opened the door of the cavern and let the animals go.

The bears lazily woke up and got out of the cavern yawning. The lions roared and left for the plains. The zebras and horses galloped away. The rhinos and elephants stamped toward the savanna. The rabbits rushed to the forest. The ducks quacked and jumped into a nearby pond. The eagles stretched their wide wings. They flew so high that soon they became only two black dots in the sky. The cranes flew in search of the marshlands. The animals were glad to see the sunshine again. They all spread around the world in search of their homes.

Afterwards, the couple helped Yima plant the seeds. The man sowed the grass seeds in the hills. The woman scattered the flower seeds in the meadows. Yima planted the tree seeds in the forest. He even put the seeds in the desert so that bush grew there. Yima traveled everywhere, sowing the seeds so that plants grew all over the world.Months passed when one day, finally, spring arrived. The orange blossoms came out. The migrating swallows once again appeared in the sky, and green grass covered the hills. Yima invited the couple and the animals for a spring celebration, which he named Nowruz or the "new day."

God saw Yima’s hard work and was pleased. He called Yima and said, "Yima, son of Vivanghat! You have saved the animals and plants. For this service, I will grant you a great knowledge and a long life. Remember always to be kind and generous to others." Thus, Yima lived for a thousand years. He became an able king who taught his people weaving as well as spinning and introduced them to iron.